Couch vs Loveseat : 5 Differences between Sofa and Loveseat You Should Know 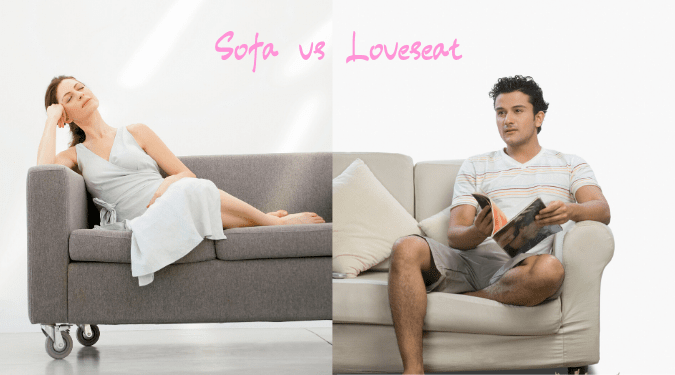 It’s not too rare when people confuse a loveseat with a couch or sofa. This actually happens often, and there are probably thousands of furniture shop employees trying to explain their differences.

But the sofa vs loveseat comparison is a bit hard to digest for most people.

If you have doubts about this, you won’t have to go to a furniture shop to get the answer. We’ll tell you everything you need to know here.

Whether you’re looking for a new piece of furniture or just want to truly understand how they differ – reading this article will help you out.

5 Differences between Sofa and Loveseat

When you look at a loveseat and then look at a regular couch, you see they’re somewhat different. But in essence, they may appear to be the same thing. Well, they’re not – here’s how you can set them apart:

A typical couch can have a total width of 90 inches. But a loveseat rarely reaches the 72 inches limit for width, usually staying between 52 and 65 inches.

In terms of height, the difference is not that much. You may find loveseats reaching up to 28 inches in height. Most couches are between 20 and 28 inches as well – but some of them may reach up to 30 inches.

In short, it is safe to say that a couch is usually bigger than a loveseat.

When looking at a couch and a loveseat side-by-side, you’ll see another difference: they often boast diverse styles.

Most loveseats tend to be classy and elegant, while sofas tend to focus on comfort and casual use. Of course, it depends heavily on the specific type of loveseat or couch – but it generally works this way.

Following this, it is safe to say that loveseats tend to be more serious. While they aren’t necessarily made to be less enticing, their design usually focuses on decency. You can read more about this in our article: What is a Loveseat and Why is it called a Loveseat?

A sofa or couch is more laid-back. So they’re likely to have bigger cushions and more relaxed designs.

If you want a more elegant or classy style in your living room, a loveseat may be your best bet. But if you want something more relaxed, a couch will work wonders.

Once you consider their style, you’ll have a better idea of how comfortable each can be. And sure enough, they also differ a lot in that sense.

A typical loveseat tends to be wide enough to host two people. But the design usually feels a little short or thin, which reduces the total seating area when compared to a couch. On top of that, they don’t go over 72 inches in width – so that can be a huge factor when considering comfort.

Couches don’t have this problem. They can reach over 90 inches in width and host three people or more. So you’re likely to find them a lot more comfortable overall. This matches well with their typically thicker seats and longer seating areas.

A decently-sized couch can host three people without problems and up to four people tightly. Loveseats can’t do that.

Another considerable difference between loveseats and sofas is their overall application.

For example, loveseats are small. They’re not used for providing seating space that people can relax on – but work mostly as accents or decoration. Sometimes, they’re used to complement larger couches and other furniture pieces. Wherever a sofa doesn’t fit, then a loveseat is a perfect choice.

In contrast, a couch can be used anywhere to provide comfortable seating. Most couches provide excellent lounging experience and can offer an ideal area for hanging out with other people. A single couch can easily host over three people, so they’re better in social situations.

The price is the real differentiator between loveseats and couches. As you can guess, a loveseat is far cheaper than a couch because of the size. But other aspects also come into work.

Because a couch is larger, it also has more cushioning material. Also, they need to be more durable. And sure enough, they cover more space and require more maintenance. Obviously, they end up being more expensive initially and in the long term.

Loveseats can be half the price of a couch or even lower. So you’re likely to find them a lot more affordable at first, cheaper to maintain, and budget-friendly. If you’re on a low budget, a loveseat is your go-to option.

When to Purchase a Loveseat/Couch 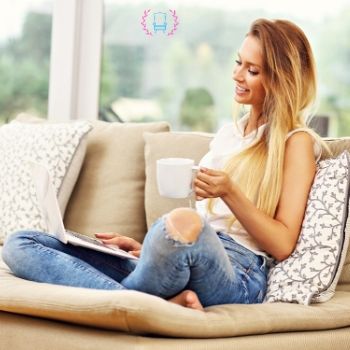 After explaining their main differences, it’s time to explain where a couch comes like the best choice, and when a loveseat will be your best bet.

When to Get a Couch

When to Get a Loveseat

Sofa vs Loveseat Comparison in a Nutshell

Is Loveseat a Couch?

In short words, it is safe to say that a loveseat is indeed a couch but smaller.

While here we explain their differences, they’re the same in essence. The name, however, changes because of the size and their typical application.

If you want to place a couch somewhere, but it doesn’t fit, then a loveseat will do the job. So, yes, they have the same function but on a smaller scale.

The Editor of Comfy Beat, Clara has been our inspiration. Ever since her childhood, nothing makes her happier than spending time in her home, making it the most comfortable place in the world.

She loves to bring comfort and happiness to everyone’s home. That’s why she joined us!